There have been changes to the COMPETES Act, with MANY amendments added, removed or updated. Section 71102, the Lacey Act Amendments, IS STILL in there but is now on a different page (2,060). This amendment is what we are concerned with.

The original COMPETES Act (HR 4521) is essentially dead, and is being reconciled (combined) with USICA- US Innovation and Competition Act (S 1260) which does not have and never had Lacey Act language.

Once the bills merge it will be a NEW bill, with a new name and may (or may not) have a new number.

Our goal is to either remove the Lacey Act Amendments from the COMPETES Act and to endure that the language is not included in the reconciliation bill.

In addition, it turns out that many emails and calls have NOT reached some legislators.

The staffers need to be on the Environment/Public Works committee, NOT animal welfare, although it probably would not hurt to do both as animal welfare absolutely will be affected by these amendments.

If you can get a face-to-face meeting with your elected representatives or their staffers that is best.

Our messaging to our legislators remains the same: Just say NO to the Lacey Act Amendments.
Please share this alert to members of the avicultural and bird keeping community
Call, email and fax your legislators

The changes to the Lacey Act will have a negative effect on nearly all animal owners in the US, on animal welfare and on the multibillion-dollar pet/companion animal industry.

Who the AFA serves

We serve the United States and the international community of people who keep birds, such as bird breeders, pet owners, veterinarians, and conservation scientists. We also provide factual information to those who regulate the keeping of birds, so decision-makers have access to accurate, up-to-date information.


How to support our mission 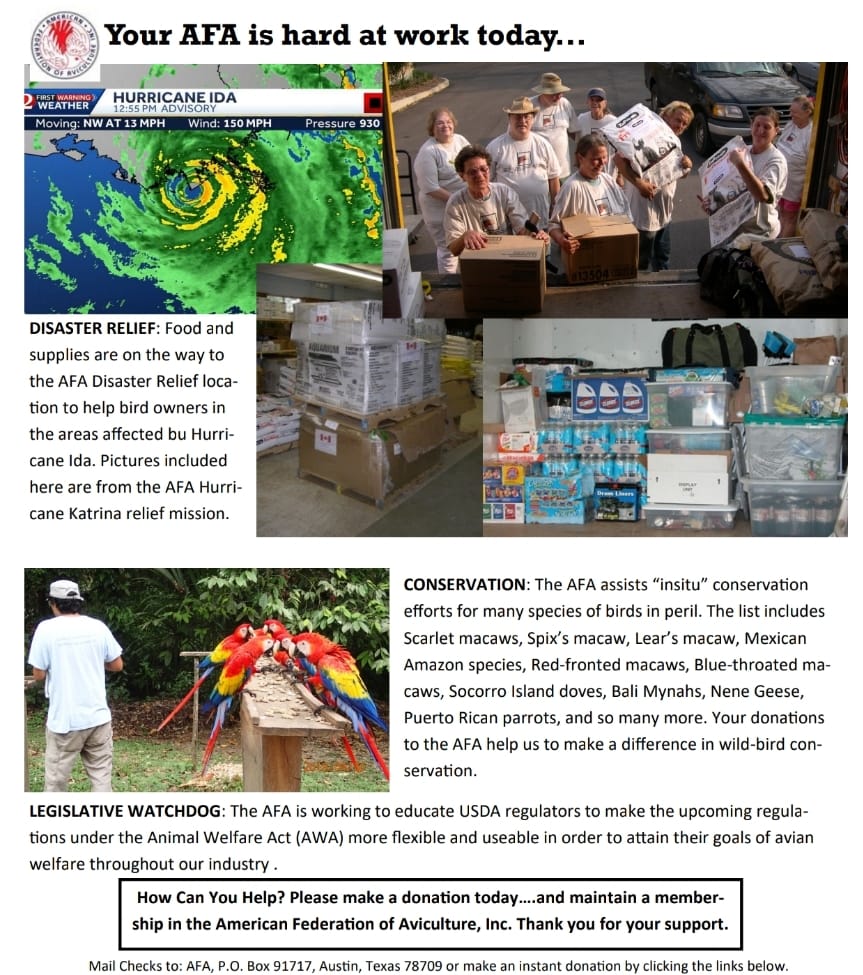 The mission and purpose of AFA shall be to promote the advancement of Aviculture through educational programs that support the advancement and improvement of breeding practices, husbandry practices, and living conditions for exotic birds, conservation, research and legislative awareness.