The Wild Bird Conservation Act (WBCA) of 1992, restricted importation of any species now listed on any appendix to the Convention on the International Trade in Endangered Species (CITES), even though some species are not really endangered. This law was enacted to stop the capture and importation of birds for the U.S. pet trade. Importation without a permit is not allowed for birds listed on any of the CITES appendices. There is a short list of approximately 19 parrot species that are exempt under this Act.

The United States Fish and Wildlife Service (USFWS) International Affairs (Management Authority) is responsible for administering CITES for the United States. They issue permits to import and export species that are protected by CITES and by various other wildlife conservation laws, such as the Wild Bird Conservation Act. They administer the Cooperative Breeding Programs for importation of live exotic birds.

Cooperative Breeding Programs (CBPs) allow limited importations of certain species for use as breeding stock. The intent of the CBP is to import species of birds that are not well represented in the United States, and to import them in sufficient numbers of diverse genetic backgrounds to support a sustainable population in the U.S.

A Cooperative Breeding Program consists of a Leader/Program Manager, and two or more breeders (which may include the leader), that must be willing to comply with the USFWS regulations, and the requirements of the overseer. The leader submits an application to USFWS for a Cooperative Breeding Program, specifying an avicultural group that will oversee the CBP. AFA has been the Overseer for the following past CBPs – Red Siskin, Blue-headed Macaw, Javan Hill Mynah, Pyrrhura Conure, Red-crested Cardinal and is the current Overseer for the Blue-eyed Cockatoo CBP which has been extended to include most of the Black Cockatoos. The Pyrrhura Conure CBP has been extremely successful at populating the US with their approved species.

USFWS requires that imported birds be domestically raised in a country not their origin. Importation of CITES I species are only rarely allowed and require a special breeding facility. So that birds may not be imported just for sale, USFWS requires that the birds be imported only by breeders, for breeding purposes, and that they may only be moved to other members of the program. When imported birds are to be transferred to a new owner for any reason, that owner should become a member of the CBP. USFWS also requires biannual updates of the program.

Pros and Cons of CBPs

The benefit of these CBP is that we are allowed to import species of birds that are underrepresented in US aviculture, and thus increase our genetic pool of these species.

The problems have been the difficulty in identifying birds to be imported, and the possibility of being scammed.

The Blue-eyed Cockatoo CBP, submitted by Susan Clubb DVM, was approved in 2005 and 9 pairs of Blue-eyed cockatoos have been imported since that time. Imports were young and are currently just reaching breeding age. A few pairs have produced young.

When I submitted the renewal of the CBP to USFWS, I requested that the permits be extended to cover all the black cockatoos. We are now permitted to import the Gang-gang, Red-, White- and Yellow-tailed Black, and Glossy Cockatoos. Palm Cockatoos are CITES I therefore importation is not allowed.

The membership of this CBP is still open. If you want to join the CBP and import some of these magnificent birds, contact Mary Ellen LePage Maryellen.lepage@gmail.com. 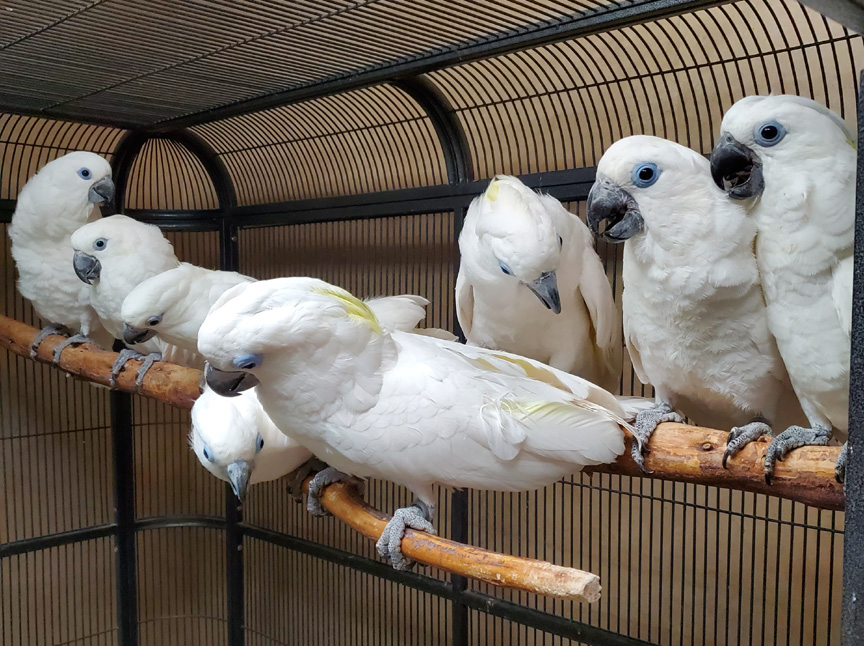 2020 was a great year for the Cockatoo co-op. Pictured are eight young blue-eyed cockatoos.